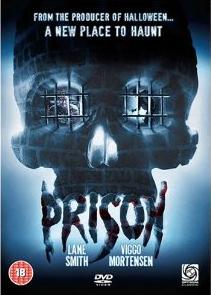 Prison is a special effects extragavanza horror film by Renny Harlin and starring Viggo Mortensen and Lane Smith, released in the year 1988.

The film opens with the title prison, Wyoming State Penitentiary, being opened again after 20 years. When rebuilding starts, a wrathful spirit (Kane Hodder) is released which starts to cause mayhem around the premises, seeking those who had wronged him in the past.