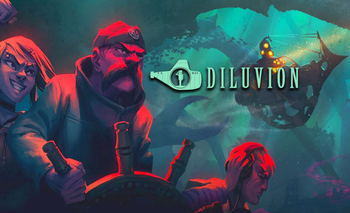 It is set in the world where The Great Flood had overwhelmed the landmasses, and the entire surface of the planet is covered by a thick layer of ice. The survivors now only hold on to a few underwater bases, but there are rumours of the ancient technology that could potentially reverse the humanity's fortunes. Unfortunately, the only place where it might be found is inside the Endless Corridor, which is the deepest, darkest and most dangerous section of the ocean, and so far nobody who has ventured there had ever returned. It's Up to You to be the first...once you manage to first ground yourself in the world, build up your own base and rise up the submarine food chain that is - the lesser craft simply isn't going to survive the pressure of the Endless Corridor's depths....

September 2018 saw the release of Diluvion: Resubmerged, which featured a range of graphical and UI improvements, new quests and a reworked salvaging system, which now includes turn-based combat encounters inside the wrecks.