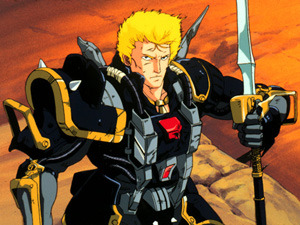 MD Geist is a one-shot OVA that was virtually ignored during its original Japanese release in 1986, but acquired a cult following among American anime fans when it was dubbed in English by Central Park Media during the early 1990s. It still has a small following of fans who enjoy the anime's pervasive nihilism. And a few other fans enjoy it for being So Bad, It's Good.

MD Geist was an experimental Super Soldier known as an MDS (Most Dangerous Soldier) locked away in suspended animation on a satellite hovering over the planet Jerra. After making his escape, Geist is involved in a few violent skirmishes in which he slaughters everyone who has attacked him in a spectacular, over-the-top fashion, before being recruited by a group of Commandos and asked to go with those commandos to Brain Palace to prevent the Death from being released. Once the mission has been completed, Geist decides that he will release the Death Force himself upon the hapless citizens of Jerra.

MD Geist was followed by a sequel, MD Geist II: Death Force, in which creator Koichi Ohata (credited in the original as co-director due to his inexperience, despite having actually directed the OVA) takes full directorial control. It picks up some time after the conclusion of the first OVA, in which most of the people of Jerra have been wiped out, with the few remaining survivors holed up in a sanctuary, protected by the warlord MD Krauser. MD Geist and MD Krauser do not like each other, so naturally they have a Final Battle.

There were also two OEL Mangas written partly by Koichi Ohata himself. The first one was a vastly expanded adaptation of the first OVA while Ground Zero was a Prequel, showing Geist's very first assignment and why he was locked away on a satellite.

Krauser: YOU DEMOOON!!! HOW DARE YOUUUU!!! I'LL SEND YOU TO YOUR GRAAAAVE!!!