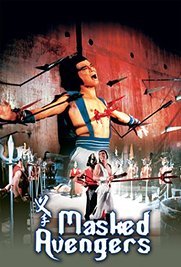 The Masked Gang are terrorizing the countryside by killing wantonly. A group of martial artists are sent to take them down.