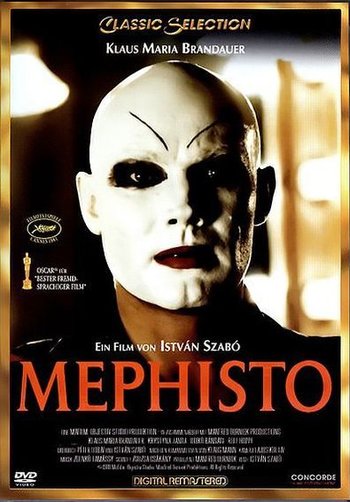 Mephisto is a 1981 film from Hungary (although the whole movie is in German) directed by Istvan Szabo. It is an adaptation of 1936 novel Mephisto by Klaus Mann.

Hendrik Höfgen (Klaus Maria Brandauer in his Star-Making Role) is an actor in Weimar Germany, specifically Hamburg. He is wholly devoted to the theater, even sometimes saying that he is "married to the theater". He's actually married to wealthy Barbara Bruckner (Krystyna Janda), while keeping a secret mistress, Juliette, his dance teacher.

Hendrik professes left-wing politics and even works in a Communist theatrical troupe, but seemingly only because artists are expected to be left-wing. What he really wants is to be a star, and his career gets a big boost when he's hired to work in Berlin, which is the big-time for German theater. He plays Mephisto in Faust and makes a big impression.

When the Nazis gain power in 1933, many of Hendrik's fellow actors either continue to oppose the regime, or emigrate. Not Hendrik, who likes his life in German theater too much. He makes friendly with the Nazi Party, and rises in the theater world, eventually becoming director of all German theater—only to realize too late that he isn't Mephisto, he's Faust, and he's made his Deal with the Devil.