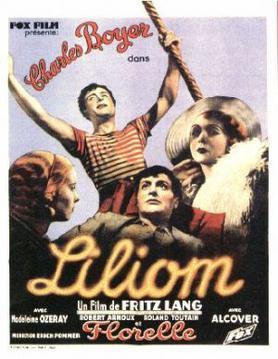 "It would be too convenient if death were the end of everything."
Advertisement:

Liliom is a 1934 film from France directed by Fritz Lang, starring Charles Boyer.

Boyer, who usually played suave sophisticated lovers, is here Playing Against Type as Liliom, a brash, brutish lower-class cad, who as the film opens is working as a carnival barker on a carousel. His flirting with a customer on the carousel arouses the jealousy of his girlfriend, who happens to own the carnival; Liliom rashly quits his job. Just as quickly the customer, a woman named Julie, falls in love with Liliom and takes him home to live with her and her aunt, who has a photography business.

This is not the wisest decision on Julie's part as Liliom is a thoughtless cad and lout, who lazes around their little house all day, making no effort to get a job even as Julie goes hungry. Julie the doormat takes Liliom's abuse, including the smack across the face that he gives her. When Julie announces that she is pregnant, Liliom decides to support her, not by getting a job or anything, but by committing armed robbery. This harebrained idea naturally ends in disaster, and Liliom kills himself to avoid arrest. He then finds himself in the afterlife, where he is in trouble for committing suicide.

Liliom was based on a 1909 Hungarian play by Ferenc Molnár, also called Liliom It was the only French movie Lang ever made, France being a pit stop between his defection from Nazi Germany and his arrival in Hollywood where he worked for the next 20 years. A decade after this movie the story would be adapted again, into one of the most famous stage musicals of all time, Carousel (itself later adapted into a film).