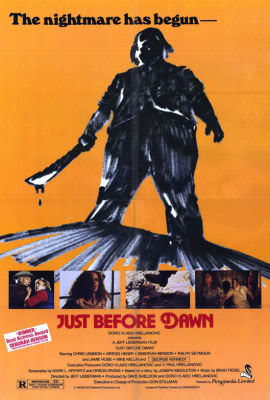 "Will anyone survive those hours Just Before Dawn?"
— Tagline
Advertisement:

A Slasher Movie from the year 1981 starring Chris Lemmon, Gregg Henry, and George Kennedy. It was filmed by Jeff Lieberman, who also directed Squirm, Blue Sunshine, and Satan's Little Helper.

The film is set in the Oregon mountainside, where a group of youths embark on a camping trip in their RV. They are warned by a local forest ranger to not to go too deep into the woods, but they ignore the warnings and find out the hard way how dangerous the forest can really be...