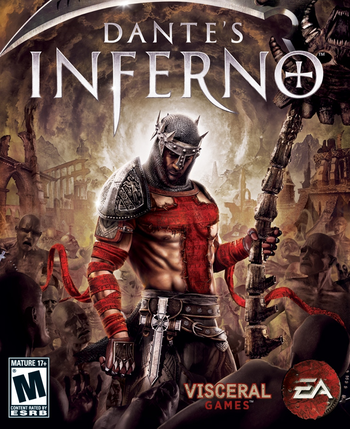 Can be used as crib notes in lieu of the actual story if required for schoolwork.
Would badass box art lie to you?
"This game would actually make a good recruiting tool for Christianity. Never has saving someone's soul been so hardcore! I'm sitting there on the good play through, and I'm forgiving every enemy I can, and going 'I forgive the shit out of you!' and 'mutha fucka, you just got forgiven' and 'oh, you little bastard, I'm gonna forgive you for that!' and the always good 'go to heaven fucker!' I just wish you could forgive the lust demons. Heaven would be so much better with those sexy bitches in it."
— YouTube comment about the game.

The Inferno part of Dante Alighieri's The Divine Comedy is one of the most well-known, well-referenced pieces of work today. It described in great detail Dante's vision of what hell would be like, and in doing so invented many of the tropes associated with Hell. This has led to several film adaptations, theme park rides, and a video game adaptation, which is what this page is concerned with.

Rumored and announced midway through 2009 for a release date in February 2010, the game is about Dante, a fresh veteran of the Third Crusade, chasing after the kidnapped love of his life, Beatrice, through the Nine Circles of Hell while tearing the place — and the demons who inhabit it — to little pieces. Unlike Dante Alighieri, this Dante is muscle-bound, an expert magic wielder, and (after the first boss) carries Death's own scythe as his weapon against Hell's armies. As he descends deeper and deeper into the Inferno, he must confront his own sins, war crimes, and his family's past, and eventually faces off with Lucifer himself, who has kidnapped Beatrice in order to wed her and break free of Hell.

Around the game's release date, an Animated Adaptation of the game was released on DVD and Blu-ray with some differences in storyline.

A sequel to the video game was being planned, although with the closing of Visceral Games the future of the franchise is now in limbo.

The damned souls Dante has freed on his journey assist him in defeating Satan.

The damned souls Dante has freed on his journey assist him in defeating Satan.