Film / The Dark Side of Chocolate 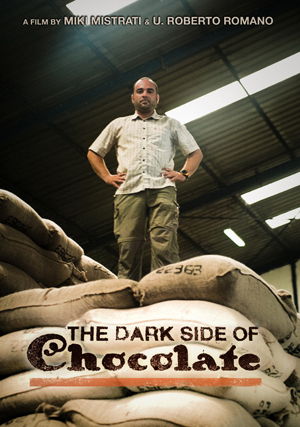 Not everything's better with chocolate...
"When you eat chocolate, you eat my flesh."note  This quote is not in the film.
— Amadou, a former child slave.
Advertisement:

The Dark Side of Chocolate is a 2010 documentary film exposing the widespread, but strangely unknown-to-the-public, use of child slaves in the cocoa industry. It follows the lives of children in the cocoa fields, their working conditions, and the abuse of power of morality and ethics therein.

Fair warning, the documentary is quite effective at showing just how ethical boundaries have been ignored by these companies, and can be a little distressing to watch, so watch at your discretion.

The documentary is narrated by David Bateson, of all people.

Tropes associated with ''The Dark Side of Chocolate: