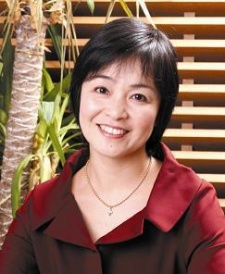 Hidaka was a former child actress who went onto becoming an on-screen Idol Singer durning her teenage years. But her popularity never improved, and was out of the spotlight for a few years; it wasn't until she took note of a fan indicating her voice as "quite unique," that she considered transferring into the voice acting field. She had a good range from Genki Girls to cute boys to Yamato Nadeshikos.

Never forget, a believing heart is your magic. That, and guts and hard work.