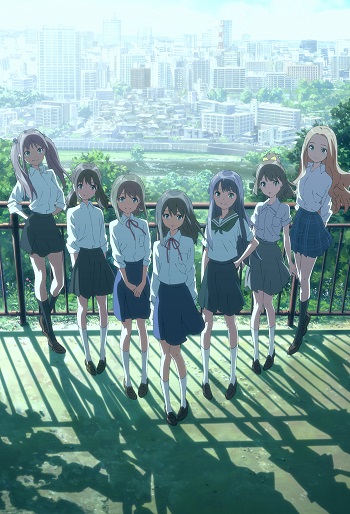 Green Leaves Entertainment was once a well-known production company in Sendai that managed the careers of magicians, photo idols, fortune-tellers, and other entertainers. However, after the 2011 Tohoku Earthquake, the company faced financial difficulties, slowly lost their clients, and soon faced bankruptcy.

After their final client resigns, the president of Green Leaves gambles the company's future on an ambitious project: a seven-person idol unit scouted from fresh, local talent in the Sendai area. However, the newly-formed group quickly realise their journey to the top is fraught with low-paying gigs, punishing schedules and hours of practice. Overcoming their hesitancy and doubt, the members of "Wake Up, Girls!" strive to leave an impact in a saturated industry dominated by the manufactured mega-group "I-1 Club".

Depicting a more realistic side of the idol industry, Wake Up, Girls! aired during the Winter 2014 Anime season. A prequel film, called Shichinin no Idol (The Seven Idols), was released on January 10, 2014, the same day the anime opened. Wake Up, Girls! is directed by Yutaka Yamamoto, and produced by his studio, Ordet and Tatsunoko Production. Wake Up, Girls! had its own game called Stage no Tenshi (which is based on the Mobage platform), that featured unique idols but was discontinued shortly after the anime finished airing, and the series is available for streaming at CrunchyRoll

An spin-off featuring the girls in Super-Deformed fashion, wearing animal costumes premièred in the Fall 2014 Anime season under the name of Wake Up Girls! Zoo. A pair of movies, titled Seishun no Kage (The Shadow of Youth) and Beyond the Bottom, aired in September and December 2015, respectively, and act as the conclusion to the second TV series. A third season titled Wake Up, Girls! Shin Shou aired in Fall 2017 and introduced a three girl rival unit to the Girls.

A manga adaptation, Wake Up Girls! Leaders, focuses on the events of the first season from Kaya and Yoppi's perspectives.

After six years in the business, Wake Up Girls! as an idol group disbanded in 2019. However, the spirit of the group lives on in the three person group Run Girls, Run!.