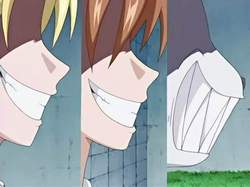 This is another artistic convention seen in anime and manga, and most commonly in comedy material.

Even when a character is facing away from the viewer and only a narrow part of the side of the face is visible, facial expressions are still apparent, especially a sneaky smile that crawls up the cheek and almost reaches the ear. Real flesh-and-blood humans are anatomically incapable of this but drawn characters suffer no such limitations.

Can be used to hide a Psychotic Smirk. Not to be confused with the even-more-anatomically-impossible Cheeky Mouth.