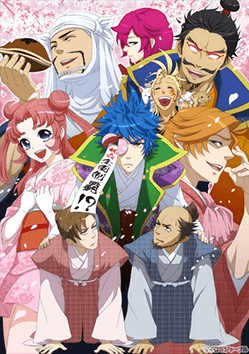 It's the Sengoku Period, and there are heroes abound. A time of war, conspiracy, scheming, and love. There were many complicated issues in the Sengoku Period; this story is about the ups and downs in the lives of heroes who lived during these turbulent times.
— Opening Narration
Advertisement:

Tono to Issho (My Lord and Me) is a Jidaigeki gag series which started out as a Yonkoma manga by Ohba-Kai, which was serialized in Comic Flapper from 2006 to 2017. It has since been made into two 12-Episode Anime seasons, One Minute Theatre and Eyepatch's Ambition, which aired in 2010 and 2011.

Each episode follows the exploits of a famous Feudal Japan personage — such as Date Masamune, Uesugi Kenshin, or Oda Nobunaga — as they go about their daily business, drawing inspiration from both historical facts and popular legends. However, it being a parody and all, Flanderization kicks in and transforms the main characters into a bunch of nutjobs, morons, psychopaths, crossdressers, and otaku, whose eccentric behaviour causes their long-suffering servants and relatives no end of stress.

The anime is available to watch here