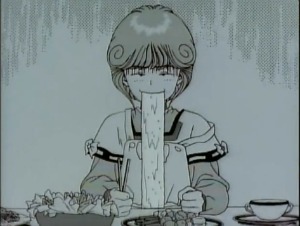 Sometimes, the creators really want to show just how disgusting, Squicky, or teeth-rottening something is to a character, but don't think a Vomit Discretion Shot is necessary (seeing as this tactic is using applied in comedy shows and the 'disgusting' thing in question isn't so bad, it's pretty much justified). So there is the Waterfall Puke—a stream of yellowish (or rainbow) ick that flows from the character's mouth to show that they are disgusted. Ironically enough, nobody else seems to notice that the character is vomiting, or even make an attempt to clean it up when they do.

Note that this is more common in anime and manga, where details can be exaggerated for comedic effect.