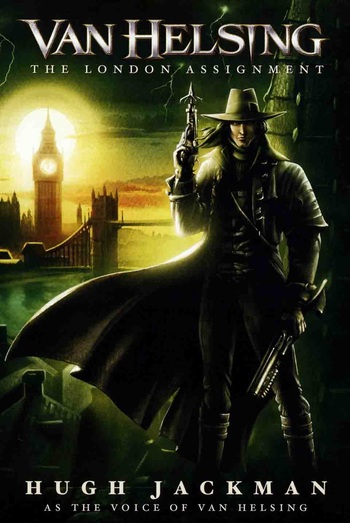 Before Dracula, Before the Wolfman, Before Frankenstein’s Monster, there was Jekyll and Hyde.
Advertisement:

The London Assignment is a short animated Supernatural Action Horror Mystery Prequel to Van Helsing, both released in 2004 with the prequel produced by Production I.G and animated by Sunwoo Entertainment. It stars Hugh Jackman who returns to provide the voice for Van Helsing.

A string of strange murders are going on in London, and the Vatican sends Van Helsing (Hugh Jackman) and Carl (David Wenham) to look in to the matter. They then discover a fiendish plot by one Dr. Jekyll/Mr Hyde (Dwight Schultz/ Robbie Coltrane) which involves Queen Victoria (Tara Strong).

This prequel has examples of: