Loser Gets the Girl 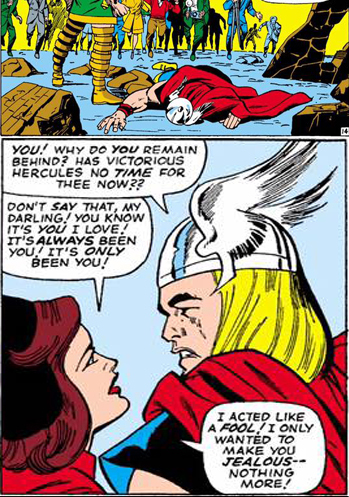 "Whosoever loses, should He be graceful, shall possess the love of Jane Foster!"
"If you would prove your love, you should do your worst."
— Jocelyn to Ulrich, A Knight's Tale
Advertisement:

Two men get in a fight, or at least a highly charged physical confrontation, over a woman they're both attracted to. One of them wins, so naturally she spurns him and goes for the loser.

Sometimes it's the winner's arrogant assumption that because he won the fight he's "won" the girl that dooms his chances. Other times, the severity of the injuries he inflicted revolts her.

Though the genderswapped version is of course possible, it appears to be rare-to-nonexistent in practice. Authors with traditional views about gender roles probably won't have women in this kind of confrontation, while more feminist writers are likely to shy away from Unfortunate Implications about female combatants somehow being unattractive. But see Wounded Gazelle Gambit.

Because this often leads to the After-Action Patch-Up or, more seriously, the After-Action Healing Drama, this often can be the result of the Florence Nightingale Effect. It can also be used as a subversion of Did Not Get the Girl: the Loser Protagonist thinks she's out of his league, but then she comes back to him. It may serve as the conclusion of an Everything but the Girl show. The loser is frequently The Woobie, especially when his love interest is intended as an audience identification character. See also Rich Suitor, Poor Suitor.