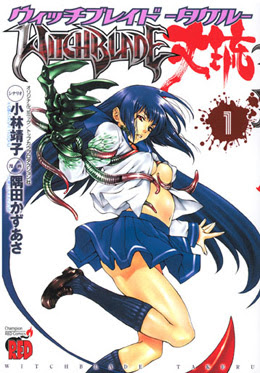 Wait, so those tentacles are part of the transformation? Okay, we all know where this is going now...
Advertisement:

A two-volume manga adaptation of the American comic book series Witchblade and the second of the three Japanese adaptations of the series (preceded by the anime and followed by a single-volumn novel titled Witchblade: Midori no Shoujo). It tells the story of the teenage schoolgirl Takeru, who became the wielder of the titular ancient, sentient weapon and eventually discovered the perils lurking around herself and the little village where she lived with her families and friends.

Takeru Ibaraki is an average, 15-year-old Japanese high school girl raised in a Buddhist convent by nuns. She has been experiencing reoccurring nightmares about the Witchblade calling out to her. This is due to the secret that the temple houses within: the Witchblade sealed inside a box. Furthermore, her lineage keeps an unknown connection with the mystic artifact and the folklore of the Oni, hence explaining Takeru's strong attraction to the gauntlet, which is locally called "Oni no Te" (literally "The Oni/Demon's Hand"). Ultimately, Takeru's life suffers a drastic change when she becomes the next wielder of the Witchblade due to some circumstances that force her to randomly encounter it, and the enemies standing before her all bear an eerily similar appearance to the legendary "Oni" which had long been a part of her home village's folklores...

Written by Yasuko Kobayashi (who also did the script for the anime), and drawn by Kazuasa (better known for his various ero-manga creations, and many of his Pixiv images are NSFW), it initially ran for a total of twelve chapters between March 2006 and Feburary 2007 on the monthly Champion Red magazine, and was later released in the US (translated, colored and flipped) by Top Cow and Bandai Entertainment from February 2007 to February 2008.