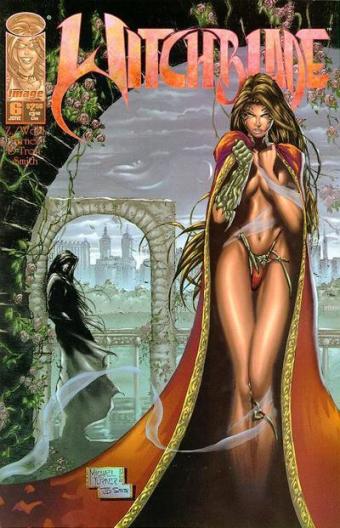 One hell of a Woman!
Advertisement:

Witchblade is an American comic book series published by Top Cow Productions, from 1995 to 2015. It centers around Sara Pezzini, a detective and the current wielder of the Witchblade. This supernatural, sentient weapon has bonded to various women through history, such as Cleopatra and Joan of Arc. While Sara struggles to master the powerful weapon and fend off those who would use it for evil, she also tries to maintain a personal life. Pezzini and her weapon first appeared in the one-shot Cyblade/Shi #1 (1995), which featured a crossover between two previously established heroines.

The Witchblade itself is an ancient, conscious, and intelligent weapon with supernatural origins. It is one of thirteen artifacts of such a type (of which five have been named so far), and the offspring of The Darkness and the Angelus (the darkness and the light, respectively). The Witchblade is a masculine aspect, designed to balance with a female wielder, but an unworthy user who tries to wield it will lose her arm. When a worthy host is found, it forms a symbiotic relationship with her, allowing her to hear it. When activated, it expands over the user's body, shredding clothes and replacing them with armor in direct proportion to the immediate threat. It can also form weapons, like swords, darts, and grapples, and it can be used in such diverse situations as picking locks or healing injuries. It can reanimate the dead, show the user scenes of great trauma, and allow the user to experience memories of past users.

In the First Born miniseries, the Witchblade split into two parts, one wielded by Sara and the other by her "understudy" Danielle Baptiste. This later turned out to be a really bad idea, and Sara is currently wielding the reunified Witchblade. Danielle went on to serve as the host of the Angelus.

As of issue #150 of the series, following the general reorganization of her universe following the Artifacts plot, Sara quit the NYPD following a (frankly long overdue) investigation by Internal Affairs, and moved to Chicago to pursue a career as a private investigator. This followed a switch in writers, as Ron Marz left the book after several years and was replaced by Hack/Slash's Tim Seeley.

Marz later returned to the monthly Witchblade book, in a new arc that finds Sara, two years later, as the new sheriff of a small town in upstate New York. This status quo would endure until the main book finally ended with issue #185, as part of a new publishing initiative from Top Cow that phased out its ongoing series.

In addition to the original comic, Witchblade has also been adapted into an anime, centering around Amaha Masane from the far future, and a live-action television series.

An all-ages spin-off comic series, Switch, was announced in 2014

(the book was originally called Twitch but the title was changed to prevent confusion with Spawn spin-off Sam and Twitch). Created by Stjepan Šejić, long-running Witchblade artist who also created Death Vigil and Sunstone, this Alternate Universe story casts Mary Parker, a snarky teenage nerd, as the chosen Witchblade bearer.

In 2017, the first issue of a new "Witchblade" series was published, penned by Caitlin Kittredge and drawn by Roberta Ingranata. It follows Alex Underwood, a former war corresponsal with PTSD now working in the Witness Aid Program. After being gunned down on a rooftop working a case, the Witchblade chooses her as a host.