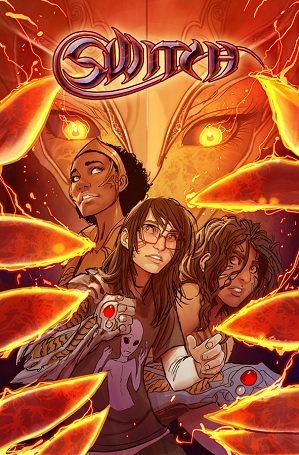 "So... why did it choose me? I had my theories, but the one I settled with, at least for a while was: you eat enough steak, and after a while you'll find yourself craving a burger."
— Mary
Advertisement:

An Alternate Universe/Alternate Continuity all-ages spin-off of Witchblade, also featuring some elements from The Darkness. This comic book series, created by Stjepan Šejić, the longest-running artist on Witchblade, is based on a what-if scenario where the eponymous Witchblade chooses Mary, a snarky nerdy schoolgirl, instead of Sara Pezzini. It began as little more than a few drawings that Šejić posted on his DeviantArt account, as an attempt to "test the waters" and see whether there's a potential readership for this kind of story. The project became very popular, and Šejić has been able to persuade his bosses at Top Cow (an imprint of Image Comics) to publish it as an actual comic book series, starting with Fall 2015, with scripts by Ron Marz. As of March 2016 two issues have been published and a third is in production.

The project was initially called Twitch, a play on "Teenage Witchblade". However, Top Cow was forced to switch the title to Switch to prevent a possible copyright collision with a Spawn spin-off, Sam and Twitch. Word of God is that the new title also has a double meaning, since in this universe the Witchblade wearer is able to "switch" between the skills of previous wearers.