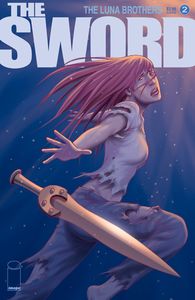 The Sword is a modern-day fantasy series and the third comic book series created by Jonathan and Joshua Luna at Image Comics. Told is the saga of Dara Brighton, a wheelchair-bound art student whose life is changed forever when one evening three mysterious strangers with Elemental Powers enter her family's house demanding that her father, whom they call "Demetrios", return their sword. The trio ransacks the house and tries to torture the sword's location out of her baffled father, killing her mother and sister before accidentally killing him. The trio is about to kill Dara and call it a day when the ceiling collapses, knocking her through the floor. Rather than bother to kill the crippled girl, Dara is Left for Dead beneath the burning house.

Miraculously, Dara happens to land right next to an antique sword stuck in the ground. Grabbing it heals her injuries, restores the use of her legs, and grants her superhuman abilities. Clearly this is the sword her family was killed over.

At her family's funeral, Dara meets Justin, one of her father's students, whose fondest memories of her father involve the stories he'd tell in class; stories about Demetrios, a ~4000 year old hero who uses his mystical sword to protect humanity from Knossos, Zakros, and Malia, a trio of godlike elemental-powered siblings.

After Dara uses the sword to dispatch some mooks sent to kidnap her from the funeral, revealing her powers in the process, she goes on the run with her best friend Julie, and Justin, determined to use Justin's knowledge of her father's stories to track down and kill her family's murderers. All the while, they have to dodge the nationwide manhunt and mass media craze that spring up once footage of Dara's superpowered exploits become widespread. Throughout her quest, flashbacks provide glimpses into Dara's life before the sword and her father's secret past as Demetrios.