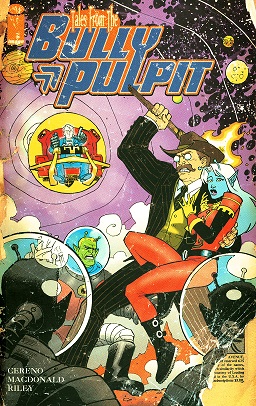 Theodore Roosevelt and the ghost of Thomas Edison steal H. G. Wells' time machine to slaughter Nazis on Mars in the future. That's the basic premise of the graphic novel Tales from the Bully Pulpit, written by Benito Cereno, illustrated by Graeme MacDonald and distributed by Image Comics. And it doesn't come close to encapsulating the manly awesomeness that it exudes.

Tales from the Bully Pulpit traces Roosevelt (or "Teddy") and Edison's adventure through time into the future, where Teddy discovers that a descendant (and look-alike) of Adolf Hitler has survived, and is planning on creating a new war and a new holocaust on Mars, this time pitting the green-skinned Martians against the blue-skinned Martians.

Tales From the Bully Pulpit Volume 2: Legend of the Black Maria is currently in the works.