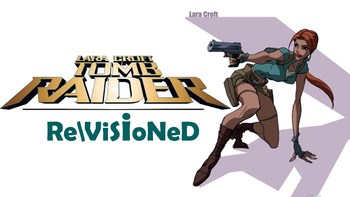 Revisioned: Tomb Raider Animated Series, stylized as Re/Visioned: Tomb Raider, is a ten-part series of short animated episodes based on the Tomb Raider series, which was originally aired on GameTap in 2007. The series consists of varying renditions of Lara Croft, from the hands of noted animation and comic artists, which range from the semi-realistic to downright cartoony. Although enjoying the alternate takes on the character, criticisms from viewers did tend to include that the shift from one to another was somewhat confusing and that the stories of each episode were a little too simple and non-explanatory. The series was meant to be the first in the Re/Visioned series of cartoons based on game franchises.

Episodes 1-3: Keys to the Kingdom

The series can be viewed in its entirety on the office Tomb Raider Youtube channel.