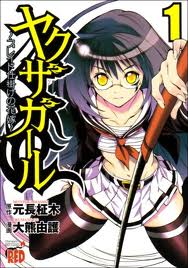 Yakuza Girl – Blade Shikake no Hanayome ("Yakuza Girl - The Blade-Wielding Bride") is a manga written by Masaki Motonaga and drawn by Yu-Go Okuma.

It started in February 2008, in modern day Japan on the grounds of Daihon Academy (Daihon Gakuen). The manga follows the protagonist Senguu Fumihiro as he enters the aforementioned academy, claimed to be one of the most prestigious in the entire country, to find a wife and thus satisfy the wish of his grandmother (who wants to see her great grandchildren before passing away). Of course, knowing absolutely nothing of what he sees as a top-level school, Fumihiro is caught completely off guard when he learns that technically every student and teacher of Daihon is in fact a wielder of supernatural skills and powers. Worst, however, is that the students, aggregated in "clans", are allowed to brutally murder each other — even their grades are based upon their enemies' death toll (i.e. the number of students of enemy clans they killed). In such an absurd scenario, Fumihiro's aid comes from Akari, the girl to whom he proposed when he saw her for the first time. She, and later he, are part of the Gusha Senmetsu Clan.

On a side note, one of the most peculiar features of Daihon, after its crazy-murderous-absurd student population, is a black, cylindrical tower that sits in what seems to be the center of the school compound, atop of which floats a black, translucent orb containing a World War II-era American B-29 Superfortress heavy bomber...