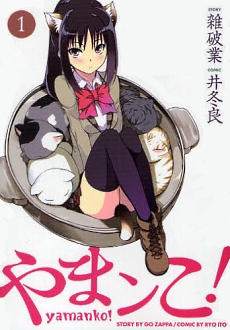 Yamanko! is a Slice of Life Seinen Yuri comedy manga written by Zappa Go (the writer of Please Teacher!, Chocotto Sister, and Domina no Do!) and drawn by Itou Ryou. The manga was serialized in Dengeki Kuro Maoh from 2008 to 2012.

Neneko Kaneko is a high school student possessed by a yamanko or "yama no ko" mountain spirit from a rural family full of other yamankos, who moves in with her aunt in the city to go to high school. There she's joined by the gloomy would-be poet Makoto Watanabe and the overly cheerful and child-like Chimi Kitou. Chimi can see spiritual forces out of one eye, which lets her spot the tail of Nene's possessing spirit. As well, Makoto is strong with a "shadow essence" that calms spirits by mere proximity... And it just so happens that the yamanko's ears and tail appear on Nene whenever she loses her cool, requiring her to stay near Makoto in public to keep them from appearing.