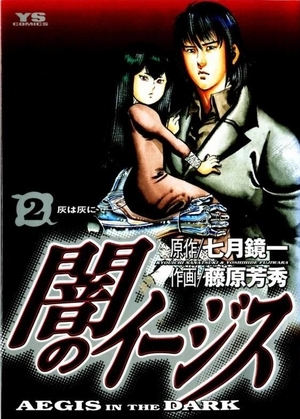 Yami no Aegis ("Aegis in the Dark") is a seinen manga written by Kyoichi Nanatsuki and illustrated by Yoshihide Fujiwara, which ran in Weekly Young Sunday from 2000 to 2006.
Advertisement:

Tate Karito is a freelance bodyguard and former operative of the National Police Agency's Special Assault Team, who's a bit of a Secret-Keeper, and has a high-tech artificial metal arm that serves as his weapon of choice. With a shady past and a penchant for protecting anyone, so long as they solve his bosses' riddles and can pay his fee, Tate follows whatever path is laid before him.