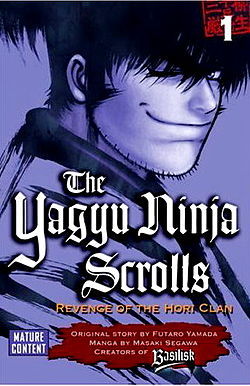 "They must be punished by the hands of women"

The Yagyu Ninja Scrolls: Revenge of the Hori Clan (Y十M ～柳生忍法帖～ Y- Jū -M - Yagyū Ninpōchō) is an 11-volume manga series written by Masaki Segawa (author of Basilisk) and first published in Japan by Kodansha in 2005. It is based on a novel of the same name from Futaro Yamada's Ninpōchō series.

In the Nineteenth Year of Kannei (1642), a rebellion by the Hori clan against Katō Akinari, the daimyo of Aizu, has been suppressed through the intervention of the Tokugawa shogunate. Placed into the custody of the Seven Spears, Katō's brutal group of personal enforcers, the Hori men are dragged to the Tōkei-ji "Divorce Temple" at Kamakura where the Hori women had been hiding. Despite a law passed by the former shogun Tokugawa Ieyasu forbidding men to enter the temple, the Seven Spears force their way in and brutally slaughter the Hori women before their husbands and brothers, and then proceeding to murder them too. The massacre is stopped only by the intervention of Princess Sen, the Tōkei-ji Temple's guardian and older sister to the reigning shogun Tokugawa Iemitsu. Unfortunately, though the Seven Spears agreed to depart, only seven of the Hori women survived.

In retribution for the violation of Tōkeiji Temple and those who she had taken under her care, Princess Sen sends a message to the famous monk Takuan Sōhō to locate one person who can train the seven Hori women in the arts of ninjutsu to seek their revenge. The one chosen is Yagyū Jūbei Mitsuyoshi, son of Yagyū Munenori and former instructor to the shogun. With Jubei's instruction and guidance, the Hori women begin their war against the Seven Spears and ultimately Katō himself.