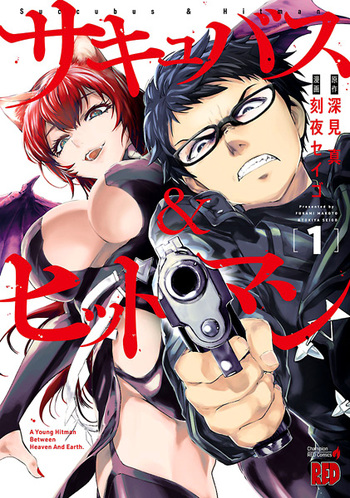 Guess who is who?
Advertisement:

One day he's living his life, and the next four shadowy figures burst into his house. They proceed to assault him, his sister and mother, the latter of whom is killed as he watches. Then he promptly gets killed.

What he sees next is not an angel, but the sexy demon Armelina who offers him a chance at revenge. Through a deal with her, his conscience is placed in that of an ordinary high school student named Gamou Shouja, and he's equipped with enhanced physical abilities and a pair of guns. Now he has to kill people, so that the succubus demon can suck up their souls. All the while getting closer to those that killed him, in order to enact his revenge.

The people around him, including his newly acquired little sister Riri, are obviously suspicious of him. He also recruits a timid otaku hacker girl, Kururi, who he uses to track down his targets.

Succubus & Hitman began serialization on Feb 19, 2020 in Champion Red. It is penned by Makoto Fukami with art by Seigo Tokiya.