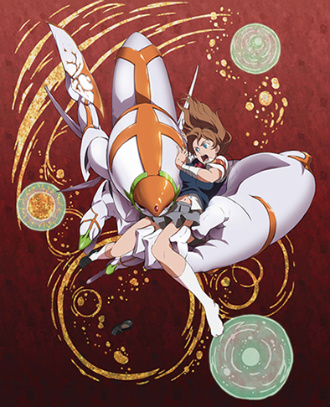 Akiyuki in his Xam'd form and Haru.
Advertisement:

Akiyuki is an Ordinary High-School Student who lives with his two best friends Haru and Furuichi on Sentan Island, a neutral zone while the North and South governments wage war. That is, until he gets caught in a terrorist bomb attack. The bomb itself comes in the form of a white haired girl, and the explosion implants a gem into Akiyuki's arm, which forcibly transforms him into a Xam'd, a humanoid creature. Nakiami, a mysterious and emotionless young woman, takes Akiyuki into her care in order to help him control his newfound power, forcing Akiyuki to leave his home and friends behind.

Meanwhile, every day life is torn asunder in Sentan Island as the Mainsoul Military takes over to stop the Humanform Weapons from wreaking havoc, but unknown to most they are doing secret experiments involving the very monsters they're trying to stop. Haru and Furuichi have both joined the military, albeit for different reasons. While Furuichi wants to protect their island, Haru is hoping to reunite with Akiyuki.

Xam'd: Lost Memories (亡念のザムド Bounen no Zamned) is produced by Studio BONES and shares some similarities to Eureka Seven, BONES's previous creation. It offers a deep and involved plot with detailed art and a rich setting.

Notably, it first came available for download on the PS3 in North America, months before it became available in Japan- unfortunately, the translation was very sloppy as noted below. It is now also being broadcast by the Anime Network and distributed by Section 23 Films' Sentai Filmworks imprint in America.