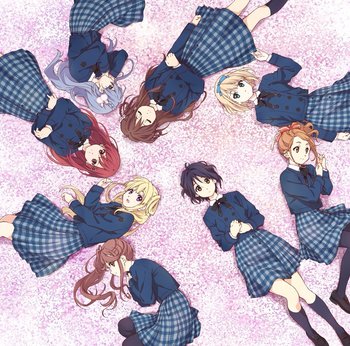 22/7 (Nanabun no nijyuuni) is a multimedia franchise conceived by AKB48 producer Yasushi Akimoto, Aniplex, and Sony Music Records in 2016. The concept focuses on "idols who transcend dimensions", where voice actresses portray a fictional Japanese pop Girl Group both in animation (voice and motion capture) and real-life.

Eleven girls were chosen out of a pool of 10,325 applicants, but only 8 of the characters were initially announced, the other 3 being revealed in September 2018. The project began with a couple of CD releases, and an Animated Adaptation was announced in summer 2017. The anime premiered on January 11, 2020, animated by A-1 Pictures under director Takao Abo. It has been licensed by Aniplex USA. The anime also received a manga adaptation, 22/7+α, which featured original stories and released concurrently with the anime. A smartphone rhythm game, 22/7 Ongaku no Jikan, ran from May 27, 2020 to December 22, 2021. Other activities in which the group has participated in include two variety shows* 22/7 Keisanchu and 22/7 Kenzanchu, a radio show, and a stint doing VTubing.

A second generation debuted in the spring of 2022.

Active members of 22/7 consist of: