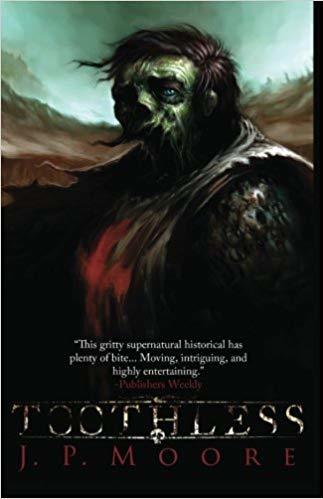 Toothless (2010) is a historical fantasy/horror novel by J.P. Moore. From the back cover:

FRANCE, 1180 A.D.
Judgment Has Come
An ancient evil leads a rampaging army of demons and undead warriors across the countryside. Martin, a failed Templar, is slain on the field of battle only to be reanimated in service to the very evil he hoped to destroy. The Black Yew, the dark force that controls the undead army, considers him a gifted minion.
But life is not done with him yet.

The book features zombies, the Knights Templar, zombie Templars, visionaries, Irish monks, werewolves, demons, plague, and the Black Yew, an eldritch abomination in the form of a gigantic evil tree. It's also notable for its use of an undead, speechless protagonist, and for its medieval take on the zombie apocalypse.

Toothless originally appeared in 2009 as podfic, read by the author, and the whole audiobook is available here

This book is not to be confused with the 1997 film starring Kirstie Alley, or with the character from How to Train Your Dragon.