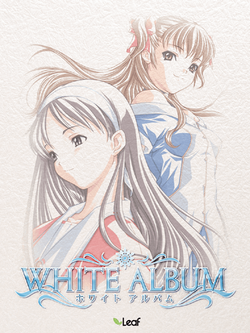 Nothing to do with that White Album, by the way.

The story deals with college student Touya Fujii and his girlfriend, the rising Idol Singer Yuki Morikawa, and the accompanying stress — along with the rest of Touya's semi-wanted harem — that is their relationship. The series is actually set in The '80s, and the lack of cellphones is important to the plot. Seriously, this story wouldn't work set in the present.

There's also a Spin-Off, White Album 2, with different characters and story but set in the same universe.

Yuki and fellow idol singer Rina Ogata appear as playable characters in The Queen of Heart, a series of doujin Fighting Games by Watanabe Seisakujo (Now French Bread), with Yuki debuting in QoH '98, and Rina debuting in QoH '99.

Much later, both girls would also be featured as support characters in Aquapazza, a Fighting Game made jointly by Aquaplus and Examu.