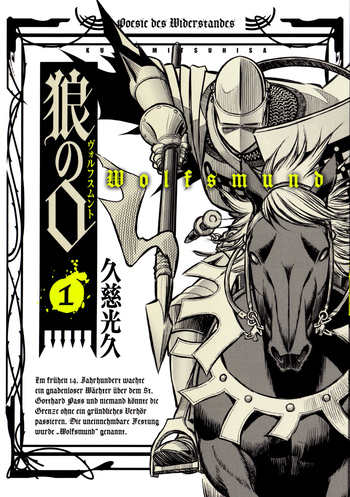 Wolfsmund (originally 狼の口 〜ヴォルフスムント〜, or Ookami no Kuchi: Wolfsmund) is a 2009–2016 medieval Historical Fiction seinen manga by Mitsuhisa Kuji, of whom little is known except that she is a talented female artist born in 1978 who studied under two of the biggest names in manga art, Kentaro Miura (Berserk) and Kaoru Mori (A Bride's Story, Emma: A Victorian Romance). Kuji's art style and interest in the real-world setting both take more strongly after Mori's, but at the same time the gruesome content and grim tone are comparable to Miura's.

Between Switzerland and Italy, there is the St. Gotthard Pass. It is the early 14th century and those who wish to flee the rule of the Habsburgs must go through this pass. However, it is not called "The Wolf's Maw" for no reason, as it is overseen by a cruel governor who follows the law with a steel fist. These are the tragedies of men and women who sought passage through Wolfsmund.

The manga plays fast and loose with real-life events and characters, focusing less on being an accurate retelling of history, and more on trying to present a thrilling story. Still, the author has Shown Their Work on the early 1300s setting by offering a refreshingly realistic depiction of various aspects of the medieval world such as politics, architecture, clothing, weapons, armor, archery, and sword fighting.

For some other medieval and fantasy manga with elements of realism, try Knights, Maria the Virgin Witch, and Berserk.