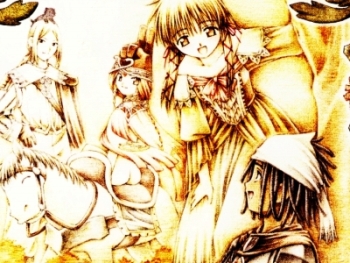 Knights is a manga written by Murao Minoru. It was serialized in the monthly Dengeki GAO, and concluded (hastily) when the magazine went out of business. There are a total of five volumes.

The story is set in a medieval world in the grips of a hysteria about witchcraft. The plot revolves around a squire, Mistletien (Mist), and his potion-maker sidekick Euphemia, as they travel around the countryside rescuing girls accused of witchcraft, and meting out justice on those responsible, particularly the ambitious Crown Prince.