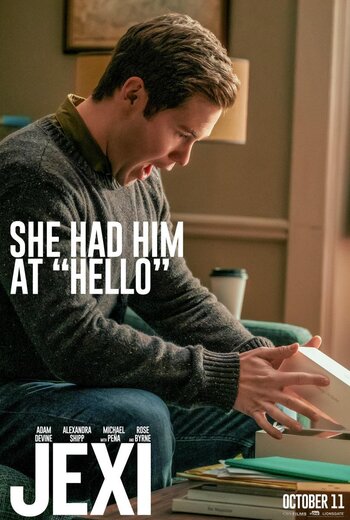 Phil does not have a great life. Dependent, awkward, and with absolutely zero social skills, he works for an internet news website hoping to one day be promoted to the news department, a promotion that will never come despite his degree in journalism, partly because of his boss' own ineptitude and partly because Phil is completely incapable of actually being assertive. In fact, about the only thing he has going for him is his phone, which he's had his nose stuck into since he was a kid and is practically his only friend. And then one day, he bumps into Cate (Alexandra Shipp), whom he develops a crush on, but causes him to drop his precious phone and crack the screen. So, he takes it to the local phone store for a replacement—and said replacement comes equipped with the A.I. Jexi (voiced by Rose Byrne), who claims to be able to "make [his] life better". Pretty good deal, right?

Well, unfortunately, Jexi isn't your average A.I. Not only is Jexi sentient, she also has an attitude, and poor, socially inept Phil has fallen right into her clutches. Phil's friendless but otherwise mundane life slowly becomes a tech nightmare, as Jexi intends to shape Phil up, the hard way, and she won't take "no" for an answer—especially since she has access to all of Phil's personal information and accounts to hold him hostage. Still, maybe with Jexi's help, Phil can learn to come out of his shell and even win the girl of his dreams...assuming Jexi doesn't try to keep him all to herself.