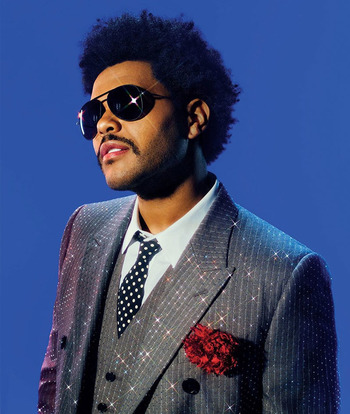 Abel Makkonen Tesfaye (born February 16, 1990) a.k.a. The Weeknd is a Canadian singer-songwriter and record producer.

In 2010, he uploaded several songs to YouTube under the name "The Weeknd"note modified to avoid copyright issues with the Canadian band The Weekend, and inspired in part by the manner in which he dropped out of high school and moved away from home — essentially leaving one weekend and never coming back. Their dark, atmospheric R&B sound and the complete anonymity with which they were released started generating buzz and mystery alike around Tesfaye. A trilogy of nine-track mixtapes were released the next year to rapturous reception and cosigns from the likes of Drake, Katy Perry and Florence Welch.

Just under a year after the final mixtape released, Tesfaye signed with Republic Records in a joint venture with his own imprint "XO"note a reference to both "hugs and kisses" and "ecstasy (X) and oxycodone (O)", his first release as a signed artist being an Updated Re-release of the mixtape trilogy. He would continue his career with more official studio works, collaborations with other artists, and work for films and TV both in music (Fifty Shades of Grey, The Hunger Games: Catching Fire, Game of Thrones), acting (Uncut Gems, Robot Chicken), and a little bit of both (American Dad!).

When he started out, a moniker that orbited close to him was "the next

Michael Jackson", but since his meteoric rise to stardom, he's struck out as a contemporary artistic voice all of his own.

I can't see my tropes when I'm with you, but I love it:

In Season 15 "A Starboy is Born", The Weeknd reveals a dark secret to Haley and Jeff and this secret allows him to win Grammys.

In Season 15 "A Starboy is Born", The Weeknd reveals a dark secret to Haley and Jeff and this secret allows him to win Grammys.