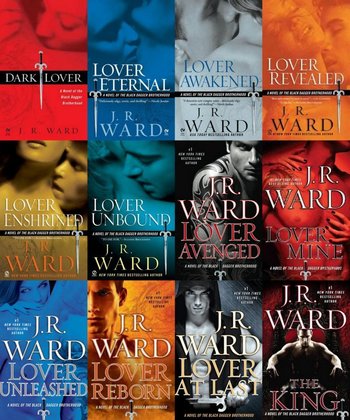 A series of paranormal romance novels written by J.R. Ward which follow the lives of the titular Brotherhood: the vampire race's most powerful warriors and protectors. Each book focuses on a different brother as he battles the de-souled human vampire hunters called lessers, and his inconvenient growing attraction to a beautiful woman.
Advertisement:

While The Black Dagger Brotherhood line of books is continuing, J.R. Ward has been writing a spinoff series about the newly recruited soldiers of the Vampire Race called The Black Dagger Legacy books. These books occur alongside the main series, revisit some of the old couples in a Where Are They Now fashion while introducing a whole new cast.

And a series set in the same world, called the Lair of the Wolven books.

Unmarked spoilers lay beyond. You have been warned.