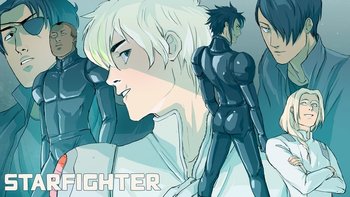 "Everyone will know you belong to me now."
"You're my bitch now."
— Cain, to Abel
Advertisement:

Set in an undetermined date in the future, a space station houses a starfighter fleet, each ship manned by a fighter and a navigator. Navigator Abel is assigned to the notorious fighter Cain, who kicks off their partnership by permanently scarring Abel to mark him as his property, then threatening him. Forced together by circumstance and military command, Abel does his best to be a professional partner and navigator to loose-cannon Cain, while entering into a brutal, messy relationship with him even as hints arise that Cain is even more dangerous than he appears.

There is a Visual Novel based on the comic, which can be found here.

NSFW for graphic sex, but has a SFW filter page.