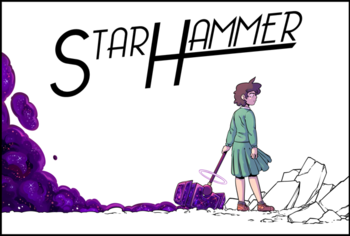 "Average is better than bad"
Advertisement:

"StarHammer is the story of a teen who inherits a powerful alien artifact and proceeds to make a series of increasingly poor decisions."

is a webcomic launched in 2015 written by J. N. Monk with art by Harry Bogosian

StarHammer is set in a world of super-powered beings (known as Advanced Humans) and with mass empowerment there comes massive problems. With Advanced Humans (advies) deciding to become superheroes or supervillains, the US government created the Department of Advanced Human Affairs to keep the situation under control.

StarHammer follows Eveylyn Li, a high schooler at Royce Academy, who wakes up to find Orion's Mallet, a powerful piece of alien technology, following them around. The floating hammer was once the signature weapon of ex-superhero StarHammer and with it in Evey's hands, they embark on their own journey of heroism. Along the way, Evey encounters a number of challenges ranging from other advies, to bureaucracy, to the former StarHammer who wants her weapon back.