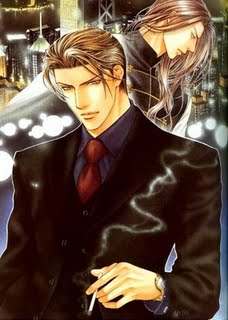 Tall, dark, handsome and filthy rich. Oh, and he wants your ass. Literally.
"Do you remember those old electric train sets that used to be popular forever ago? The ones that went through the town, the forest, and then finally into the tunnel in the mountain? Yeah, the seme is the train."
— Vixen
Advertisement:

A character role associated with the Yaoi genre, the Seme (or "Tachi" in Yuri works) makes up the "giving half" of the same-sex relationship and is often (though not always) more masculine than the Uke. In extreme cases this is signified by him being One Head Taller than the Uke though in more modern works this has become much rarer with the Uke and Seme being roughly the same height. If he wears glasses, they'll probably be thin-rimmed so it will make him look sophisticated, intelligent and/or sinister (not to mention a lot more brutal). The Seme is often the aggressive pursuer in a relationship, and in the cases where the Uke takes up that role, the Seme will still come out on top when it comes to the lovemaking. Sometimes violently. Can be a Fetishized Abuser.

Since Boys Love is a sub genre of Shoujo manga, expect to see the Seme and Uke written with tropes common to that genre. Such as hot bad boy with a heart of gold to the ice king whose heart can only be thawed by The Power of Love to the Knight in Shining Armor who's always there to rescue or protect his beloved. See Boys' Love Notes for a list of standard seme and uke types. One of the attractions of Boys Love works, however, is that since the uke is male, and thus a legitimate object of desire, it's easier for the female reader to place herself in the dominant role than it is in a heterosexual romance.

In yuri, or Girls' Love, an Onee-sama or Butch Lesbian who is openly attracted to someone can also take this role. Ironically, a female character who acts or looks openly masculine is actually less likely to be the seme, since this is usually equated with tomboys and immaturity. The Onee-sama is likely to be more aggressive and mature, leaning towards The Vamp or Femme Fatale in appearance and/or demeanor.

Interestingly, "foreign characters" tend to be seme. This might be the literal use of the One Head Taller rule, sheer exoticism for fanservice, or the common Shoujo/josei stereotype that Western men are more aggressive and masculine (and thus seme-like) whereas Japanese men are more beautiful and refined (and thus uke-like).

By the way; there is no "N" in Seme. That is something completely different.

And for all you Baseball fans keeping score: he's the pitcher.

Note that this usage of the word originated in the Boys' Love Genre fandom; among "regular" Japanese people "seme" just means "attack". It is used commonly in some martial arts like kendo when referring to the attitude of an attacker. Even Japanese gay men won't necessarily know the BL meaning of the term.