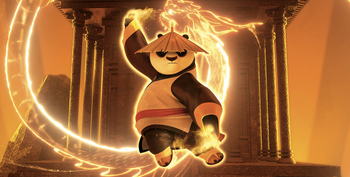 Skadoosh!
"To ask why we fight... is to ask why the leaves fall. It is in their nature. Perhaps, there is a better question. Why do we fight? To protect Home, and Family... To preserve Balance, and bring Harmony. For my kind, the true question is: What is worth fighting for?"
— Chen Stormstout, Warcraft
Advertisement:

Pandas are strongly associated with their native China, and since All Chinese People Know Kung-Fu and All Asians Know Martial Arts, pandas will invariably be skilled in the martial arts. Despite their big size, they will be portrayed as forces to be reckoned with. This trope exists despite, or because of, real-life giant pandas stereotyped as generally being lazy lumps of bamboo-eating cuteness.

A Sub-Trope of Pandaing to the Audience, and a specific type of Bears Are Bad News. Subverts the usual stereotype of pandas as lazy or slow and not nimble animals. Also a subtrope of Animal Occupation Stereotypes.