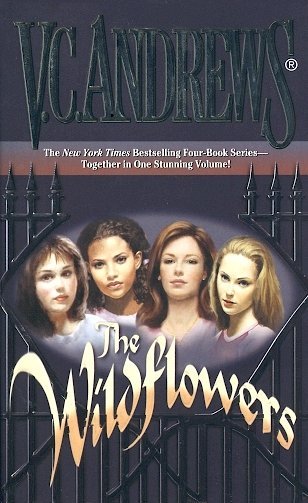 Four young women dealing with the heartbreaking trauma of a family breakup and the repercussions of dark and horrifying secrets from the past....note Cover of the US omnibus edition containing the first four books, by Tony Greco and Lisa Falkenstern.
Advertisement:

The Wildflowers is a series of novels published under V.C Andrews's name, but actually written by a ghost-writer. Published in 1999, the series revolves around four troubled teen girls who are court ordered to attend group therapy. Slowly, they open up to each other about their Dark and Troubled Pasts and discover they aren’t quite as alone as they first thought.

The first four books are told from the point of view of a different girl and focus on their individual stories, whilst the last book, told from Cat’s viewpoint, focuses on what happens to them after.

Not to be confused with the band The Wild Flowers or Ghosts Among The Wildflowers.