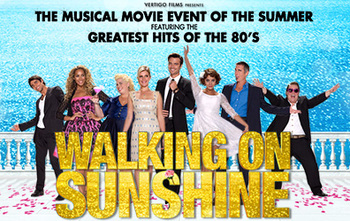 "...But then, suddenly I knew some summer romances are meant to last forever."
— Maddie
Advertisement:

Walking on Sunshine is a 2014 British Jukebox Musical romantic comedy film. It stars Hannah Arterton, Annabel Scholey, Giulio Berruti, Katy Brand, Greg Wise, Giulio Corso, Danny Kirrane, and Leona Lewis, and was directed by William Pym and Dania Pasquini. It's been described by many as the UK's answer to Mamma Mia! (despite the movie not being based on a popular stage production) and features music from popular artists from The '80s, such as Madonna and Whitney Houston.

The movie stars recent university graduate Taylor (Arterton), who is returning to Italy after three years of studying to reunite with an old boyfriend named Raf (Berruti) and meet up with her sister Maddie (Scholey). Maddie is engaged to an attractive local man and is planning to surprise her sister when she arrives, with the help of their old friends Lil (Brand), Elena (Lewis) and her Italian boyfriend Enrico (Corso), and Mickey (Kirrane), who are either visiting too or have emigrated to Italy.

After spying Raf on the beach, Taylor works up the courage to surprise him but is shocked to discover that her old boyfriend is now her sister's fiance. Taylor attempts to get over the shock and convinces herself that Raf was an old teenage fling but their mischievous friends are constantly setting everyone up for activities that force her and Raf to face each other. Meanwhile, an excited Maddie prepares for her wedding but soon reunites with an old boyfriend named Doug (Wise), who is desperate to reignite their relationship, much to her annoyance.