Film / Voyage of the Rock Aliens 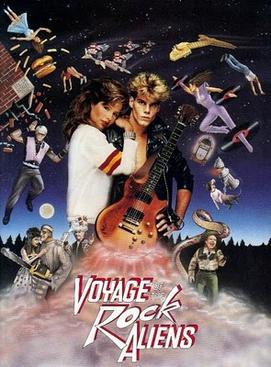 Voyage of the Rock Aliens is a 1984 sci-fi musical written by Edward Gold and James Guidotti and directed by James Fargo and Bob Giraldi.
Advertisement:

The alien ABCD (Tom Nolan), his followers EFGHI, JKLM, NOPQR, STUVWXYZ, and AEIOU (techno band Rhema), and their robot 1359 (Peter Cullen) have been searching the universe for the source of rock and roll music, and finally arrive on Earth, in the town of Speelburgh. With 1359 disguised as a fire hydrant, they set off in search of intelligent life. They meet high schooler Dee Dee (Pia Zadora), with whom ABCD promptly falls in love. Unfortunately for him, Dee Dee is dating local bad boy Frankie (Craig Sheffer), frontman of the Pack (Jimmy & the Mustangs). In a side plot, two mental patients, Chainsaw (Michael Berryman) and Breather (Wallace Merck), escape from the hospital and go on a killing spree.

Voyage of the Rock Aliens contains examples of: