Film / Whistle Down the Wind 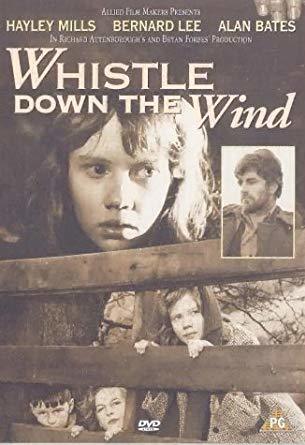 Whistle Down the Wind is a 1961 British film, directed by Bryan Forbes, produced by Richard Attenborough and starring Hayley Mills, Bernard Lee and Alan Bates.

Before reading the plot summary, please bear in mind that this is actually a highly moving piece of cinema. It's just that the plot's hilarious.

Three children (the eldest of whom, Kathy, is played by Mills) from Oop North who live on their widowed dad's (Lee) farm find an escaped murderer in their barn. A combination of a Salvation Army member confusing the children and a misplaced blasphemy by the criminal (Bates) leads the children to believe he is in fact Jesus himself. The word soon gets out to the rest of the children's Sunday school class who resolve not to tell any adults and to keep him safe for the mean time. The criminal (who the police want under the name, "Blakey") asks Kathy to fetch a parcel for him; she obliges, not knowing the parcel contains a revolver, leading to the climax when one of the children reveals the secret.

The film was based on a novel (by Hayley Mills' mother) with the same plot but set in Sussex. Attenborough asked the writers to give it a more realistic feel by setting it in Lancashire. It has since been adapted into a musical by Andrew Lloyd Webber, which sets the events in Louisiana, rather than England.

This film contains examples of;