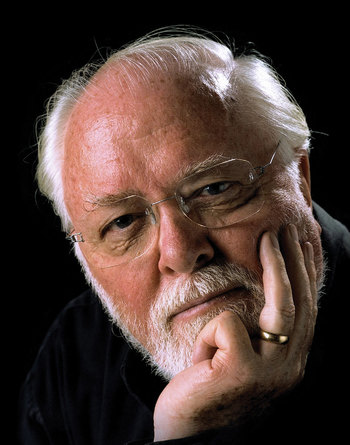 "What I am interested in is how actors can touch the heads and hearts of an audience."
Advertisement:

Richard Samuel Attenboroughnote Kt, CBE, FRSA (29 August 1923 – 24 August 2014) was a British actor and director. He was knighted in 1976, and made a life peer, with the title of Baron Attenborough, in 1993. He also served in the Royal Air Force during World War II.

On stage he was one of the original cast members of The Mousetrap, and played Pinkie Brown in the 1944 theatre adaptation of Brighton Rock; the latter became his breakout film role when the play was adapted to film in 1947, and was followed by many film roles as criminals and wrong 'uns of various stripes. His first major Hollywood film was The Great Escape (1963), in which he played Bartlett, the head of the escape committee.

He made his directorial debut with Oh! What a Lovely War in 1969. One of his most famous films is Gandhi (1982), which he worked for over a decade to get made, and which won him both the Academy Award and the Golden Globe.

As his directing took off, he spent less time in front of the camera, and had no film acting roles at all in the 1980s and early 1990s. (With the exception of a Creator Cameo in A Bridge Too Far, he never acted in any of the films he directed). This changed when he accepted the role of John Hammond in Jurassic Park (1993), followed by several more roles of a grandfatherly or elder statesman type.

He was the elder brother of David Attenborough, the famous maker of nature documentaries.

Films directed by Richard Attenborough with pages on this wiki include:

Attenborough as an actor: