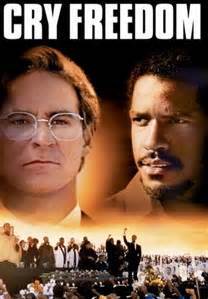 "[...] If you do run fast enough, if you do survive, you grow up in these streets, these houses. Your parents try, but in the end, you only get the education the white man will give you. Then you go to the city to work, or to shop, and you see their streets, their cars, their houses, and you begin to feel there is something not quite right about yourself. About your humanity. Something to do with your blackness, because no matter how smart or dumb a white child is, he is born to that world. And you, a black child, smart or dumb, you are born into this. And smart or dumb...you'll die in it."
— Steve Biko
Advertisement:

Cry Freedom is a 1987 film, directed by Richard Attenborough and starring Denzel Washington and Kevin Kline.

It was based on the books Asking For Trouble: Autobiography of a Banned Journalist and Biko by Donald Woods, who later published Filming With Attenborough: the Making of "Cry Freedom" about the movie, since he helped during production and even became friends with Kline.

The film opens in November of 1975 with a brutal raid by South African police on a shantytown illegally set up by migrant workers, setting the scene for events in the country at that time. Donald Woods is the white editor of a liberal newspaper, but he views Steve Biko as a black racist who must be opposed along with the apartheid system. A friend of Biko's confronts Woods about this, saying he isn't a racist, and challenges him to find out who Biko really is. Woods meets with Biko, who is a "banned" person, forbidden to move about freely or meet with more than one person outside his home at a time, but cleverly finds ways to escape this. Despite initial misgivings, Woods comes to like and agree with Biko, who brings him to the townships so he can view the horrible conditions in which the government forces black people to live. An increasing spiral of legal harassment and intimidation from the government results with Biko finally being arrested, then dying in police custody. Woods sets out on a quest to reveal the truth of his murder despite the danger to his family and himself.