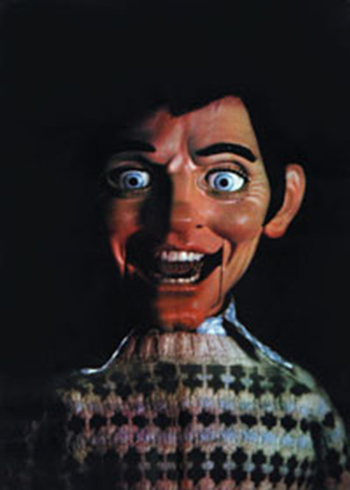 "Magic is fun!"
"Abracadabra, I sit on his knee.
Presto chango, and now he is me.
Hocus pocus, we take her to bed.
Magic is fun; we're dead."
— Fats, in the TV spot
Advertisement:

Magic is a 1978 Psychological Horror film directed by Richard Attenborough and written by William Goldman, who adapted his own 1976 novel.

Failed stage magician Corky Withers (Anthony Hopkins) manages to revitalize his career with the addition of ventriloquism to his act; unfortunately, he also begins to manifest a split personality through his dummy, Fats, and when about to hit it big with a television deal, he flees rather than submit to the required medical examination.