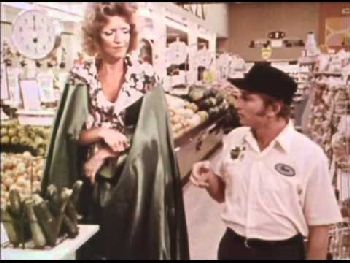 Saving you money - whether you want her to or not.
"Let’s just say that if Mr. B Natural got really high and dressed like a 1950's Chesterfield, you’d be hard-pressed to tell the difference."
—MST3K Fan Guide

Magical Disappearing Money is a 1974 short about saving money at the supermarket, as explained by a witch to a crowd of shoppers. It is notable for the witch, heir to Mr. B Natural (according to the guys at RiffTrax).

The short provides examples of: