The Puppet Cuts His Strings 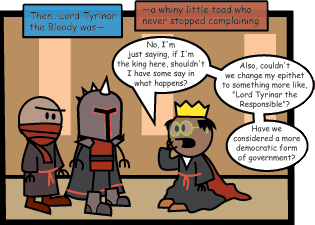 So. The Conspiracy managed to do it: they put a Puppet King on the throne and now rule as The Man Behind the Man. The puppet was carefully selected to be stupid, ignorant, tractable and totally dependent on them, and yet look like a Reasonable Authority Figure to the other people. They now have free rein to enforce their agenda without anyone realizing anything before it's too late.

...except that, to the conspirators' surprise, the man turns out not to play his role nicely. He starts acting on his own, taking his own decisions, disobeying the conspiracy, and sometimes outright opposing those who put him into power. It is frequent that he eventually acquire some form of control on them, the puppeteer and puppet ironically switching roles.

There are mostly two types of this:

This trope can feature a clear moral reading grid with the redemptive (and thus good) Puppet King eventually opposing the evil conspiracy, but is far more likely to have a Grey-and-Gray Morality.

For reasons that should be obvious, No Real Life Examples, Please.