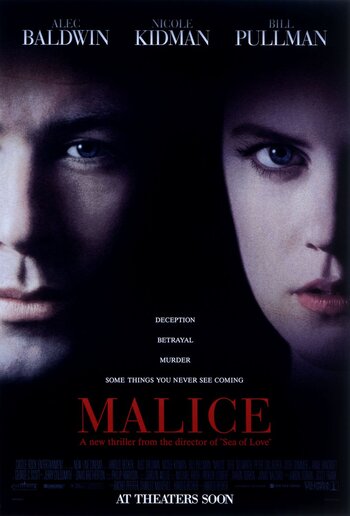 Malice is a 1993 thriller film starring Alec Baldwin, Nicole Kidman, Bill Pullman, and Bebe Neuwirth, with Anne Bancroft, George C. Scott, Tobin Bell, and Gwyneth Paltrow turning up in smaller roles. The film was directed by Harold Becker, previously known for such films as Vision Quest (1985) and Sea of Love (1989), and co-written by Aaron Sorkin.

Andy Safian (Pullman) and Tracy Kennsinger (Kidman) are a young married couple. He is an Associate Dean at a college, while she volunteers in the children's ward at the local hospital. They have recently settled in the suburbs of Boston. Their residence is a Victorian house needing renovations, and they are considering renting out the top floor. At that point a serial rapist threatens one of Andy's students. Her life is saved by Dr Jed Hill (Baldwin), a brilliant surgeon. Andy recognizes Jed as an old friend from his high school days. They reacquaint themselves and Jed rents the top floor.

Their lives are further complicated by two events. First, young Paula Bell (Paltrow) is raped and murdered. She happens to be another of Andy's students, making him a prime suspect in the eyes of the police; Detective Dana Harris (Neuwirth) plans to keep an eye on him. Second, Tracy is hospitalized with abdominal pains, soon discovered to be the results of ovarian cysts and a new pregnancy. Jed convinces Andy that they will need to remove her ovaries for her to survive, sterilising her for life; however, it turns out the necessity of the operation was questionable. Tracy sues the hospital for several million dollars and ends her marriage.

Andy has two further surprises waiting for him. First, in connection with the rape investigation Dana has had a sample of his semen examined. He is infertile and therefore couldn't have got Tracy pregnant. Second, his mother-in-law Mrs Kennsinger (Bancroft) contacts him with some information, which comes as a shock since Tracy had claimed to have no living relative.

From there the story proceeds with several twists and turns. Several layers of deception and misdirection complicate the story. As Roger Ebert put it, the film is "jampacked" with "blind alleys and red herrings".